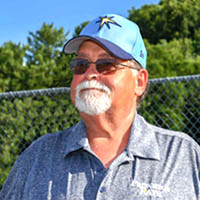 2 Timothy 4:7 – I have fought the good fight, I have finished my course, I have kept the faith.

Danny Ray Richardson, age 64, of Peterstown, WV, passed away from his earthly home to walk the streets of gold on Thursday morning, May 21, 2020, at his home. Danny had fought a courageous battle with cancer for over a year.

He was a member of the Oakvale Church of the Brethren, CMA-Mountain Circuit Riders, and a Board Member of the Princeton Rays. He retired from AEP at Glen Lyn, VA, after several years of service.

Left to cherish Danny’s memory is his wife, Barbara of the home; daughter Roseann Phipps and husband Sean of Peterstown; son, Danny “Richie” Richardson, Jr. of Peterstown; the lights of his life, granddaughters Sydney Phipps and Caroline Richardson; his twin brother, Sam Richardson and wife Connie of Pearisburg, VA; half-brothers, Bobby Ramey and wife Sue, and Woody Richardson, all of Pedro, OH; aunt, Betty McGhee of Vinton, VA; sisters-in-law, Gerlene Dillon and Carol Booth, both of Peterstown; brothers-in-law, Jack Booth and Stephanie of Hillsville, VA, and Junior Booth and Joann of Peterstown; and many nieces and nephews.

Graveside services will be held at 2:00 PM on Sunday, May 24, 2020, at the Peterstown Cemetery in Rich Creek, VA, with Jim Stade, Dewey Broyles, and Terry Utterback officiating, and Dave Bishop representing CMA. Bobby Choate, Randy Carroll, Roger Pence, Robert Steffey, Timmy Neal, Sean Phipps, Nick McMahan, and Sam Richardson will serve as pallbearers. CMA members and Mild Hogs will serve as honorary pallbearers and escort the procession from the funeral home to the cemetery.

In lieu of flowers, the family requests that donations be made in Danny’s memory to Kanawha Hospice Care (1265 Maplewood Avenue, Lewisburg, WV 24901).