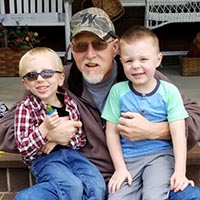 Ben was a 1981 graduate of Narrows High School. He loved playing sports in high school and is in the Narrows High School Sports Hall of Fame for football. Ben was a die-hard Duke fan, and an avid outdoorsman. He also was the manager of Auto Specialty Care in Narrows. He was a beloved member of the New River Valley community and surrounding areas.

Due to the Coevid-19 regulations, a memorial service will be held at a later date at the First United Methodist Church in Narrows. The family is being served by Givens-Riffe Funeral Service in Narrows, (540) 726-2442, and online at riffefuneralservice.com.