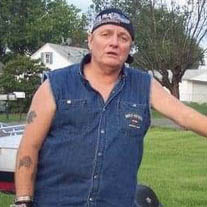 Bobby went through life working as a mechanic, and eventually would own his own business, NRV Forklift Services. He was a very free and independent person who liked to live life on the wild side, as his hobbies of marriage, motorcycles, and racing can attest.

In addition to his parents, he was preceded in death by one sister, Juanita Breeden. Survivors include one daughter, Angela Dawn Smith of Pulaski, VA; two sons, Robert “Robbie” Rice, Jr. of Christiansburg, VA, and John Rice of Morristown, TN; and one sister, Bonnie Dean and husband David of Draper, VA. Also, Bobby will be remembered by his multiple grandchildren, his numerous nieces and nephews, and his extended family and friends.

In keeping with Bobby’s wishes, he will be cremated. A memorial service will be held at a later date. Online guestbook can be signed or condolences may be sent to the family at www.broyles-shrewsbury.com. Arrangements by Broyles-Shrewsbury Funeral Home, Peterstown, WV.