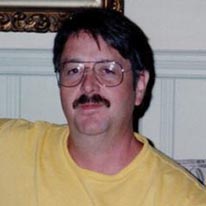 On Friday, August 12, 2022, Raymond Randall Rice, Jr., age 71, of Pulaski, VA died peacefully at his cabin with family at his bedside. Born on July 19, 1951, in Radford, VA, he was the only son of the late Raymond R. Rice, Sr., and Virginia Wallner Rice of Pulaski. He was also preceded in death by his sister, Martha Rice-Shelton and his brother-in-law, Allen Mott.

A 1969 graduate of Pulaski High School, he also studied history in college. Crunch dearly loved (and was loved by) his family and friends. He was friendly, thoughtful, and had a great sense of humor. When his mother, Virginia, developed Alzheimer’s disease, Crunch served as her primary caregiver. They laughed a lot, enjoyed visiting friends, and sometimes engaged in drag-racing. Despite claiming to dislike children (except for French children for whom he made an exception), he was an astonishingly good uncle and granduncle.

Crunch was a voracious reader, a history buff, and a great cook; he loved to entertain his family and friends at the cabin. He was also the only person in the world who knew how to correctly load a dishwasher. He was unassuming, always himself. Though he maintained a gruff exterior, he was an excellent friend; he gave what he could, and he did what he could for others.

The genuinely thoughtful kindnesses of this wonderful man, brother, uncle, cousin, and friend will be greatly missed. Left to cherish his memory are his many friends and his sisters, Suzanne (Suzi) Rice Mott of Naples, FL, Roberta (Bobbi) Rice Sullivan (John) of Asheville, NC; his cousins Cathy (Terry) Coble of Pulaski and Ashley Nackley of Livermore, CA as well as his nephews, Andrew (Andy) Holland of Somerset, PA, Sean Sullivan (Laura) of Asheville, NC and Thomas (Tom) A. Mott of Naples, FL and his nieces Regan Shelton of Pulaski and Molly Sullivan Reeves (Michael) of Asheville, NC; several great & great-great nephews nieces and cousins; and a special friend, Suzette Carter.

It was his wish to have no services. Seagle’s is handling arrangements. Because none of us can agree on a common charity, we ask that you commemorate Crunch by sharing a good meal, some jokes, and a beverage of your choice with friends and family. Just know that he’s judging you as you load the dishwasher.