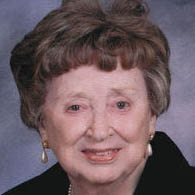 Frances Catherine “Rusty” Rice of Blacksburg, Va., passed away on Friday, June 3, 2016, at the Kroontje Health Care Center. She was born in Plymouth, Pa., on December 7, 1920, the daughter of Mary Riley Brennan and Michael Brennan.

She graduated from Mercy Hospital School of Nursing, and enlisted in the United States Army in 1944, receiving a medal for her service in France at the Battle of the Bulge. After the war, she married the love of her life, Francis Xavier Rice. They raised their family of three daughters in River Edge, N.J., active in their church and community. She was a member of the River Edge Women’s Club for 50 years, serving as president from 1979 to 1984. They moved to Warm Hearth Village in 2001, where she was active in the American Legion Women’s Auxiliary. In 2014, she was awarded the French Legion of Honor, rank of Chevalier, to honor her valor during World War II in France.

In addition to her parents, she was preceded in death by her husband, Francis Rice; her sisters, Eleanor Fino and Phyllis McAndrew, and brother Thomas Brennan.

The family wishes to express heartfelt appreciation for the excellent care provided by the staff of The Kroontje Health Care Center.

A Funeral Mass will be held at 9 a.m. Tuesday, June 7, 2016, at St. Mary’s Catholic Church in Blacksburg, officiated by Father Remi Sojka. The family will receive friends at McCoy’s Funeral Home from 5 to 7 p.m. Monday, June 6, 2016.In lieu of flowers, memorials may be made to the Warm Hearth Foundation, 2387 Warm Hearth Drive, Blacksburg, VA 24060, www.retire.org. Arrangements by McCoy Funeral Home, Blacksburg.