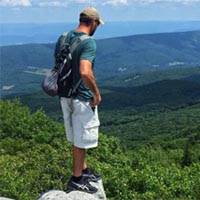 Curtis Marion Rice, age 38, of Blacksburg, passed away unexpectedly on Saturday, March 16, 2019. Originally from Charleston, South Carolina, Curtis developed a love for the mountains as he visited family and friends in Blacksburg and decided to move there permanently in 2005.

He was an adventurer at heart, always admiring nature through his hikes, rock climbing trips, and boating on the local lakes and rivers. He was a loving and dedicated father who was always cheery and full of laughter. Curtis’ sense of humor was well known by all who knew him. He never met a stranger and everyone he spoke to loved him instantly, allowing him to easily develop a very wide circle of loving friends. Curtis had many accomplishments in his short life, but his two daughters were his greatest, and he spoke of them to everyone he met with such love and pride.

Services to celebrate Curtis’ life will be held on Saturday, March 23 at 11:00 am in the McCoy Funeral Home Chapel with a reception to follow. In lieu of flowers, donations can be made to the Go-Fund-Me account established for his children.