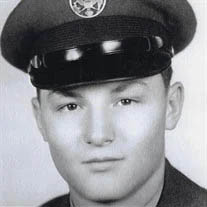 Eugene Reiva, age 86, of Blacksburg, died, Thursday, July 23, 2020 at his home. He was born in Wiggins, Colorado on August 15, 1933 to the late James and Katie Dodge Reiva. He was also preceded in death by his brother, James Reiva; sister, Shirley Reiva Kreutzer.

He retired from the United States Air Force after 23 years and later retired from Montgomery County. He attended Auburn Baptist Church.

He is survived by his wife of 66 years, Shirley Lucas Reiva; daughters and sons-in-law, Shelane and Clifton Walters, Angie and Richard Absher; grandchildren, Derick (Meredith) and Jarred (Melanie) Walters, Brad and Katie Absher; four great-grandchildren; as well as several nieces and nephews.

Services will be held privately.