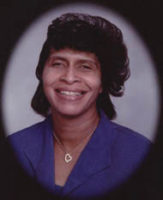 Golda Jearline Calloway Reed, of Hopewell, formerly of Radford, entered into eternal rest peacefully on January 24, 2015. Golda was born on June 27, 1950 in Radford, VA the daughter of the late Clifton Norman Calloway and the late Doretha Hendricks Calloway.

She was also preceded in death by a half brother James Arthur Taylor.

Golda attended CII then later graduated from Radford High School and went on to attend New River Community College. Golda held positions for both the state and federal government as well as positions in the private sector. Golda gave her life to Christ in 1976 and continued to faithfully serve until God called her home. Golda was a kind and loving person who always put her family and others first. Her love for the Lord was conveyed to all that knew her.

Golda is survived by her daughter Nicole Reed; and sons Sean, Micah, and Anton Reed. Also left to cherish her memory is her sister, Norma Gathers and brothers Clifton, Danny, Roy, and Jessie Calloway. There are also grandchildren Anton, Alaya, Micah, Aron, Amir, and Noah Reed; and a host of nieces, nephews, cousins and other relatives and friends to cherish her memories. Though her time here seems far too short; her memories are unmeasured and will live on and on forevermore.

The family will receive friends from 1:00 pm until 2:00 pm on Saturday, January 31st at the Mullins Funeral Home in Radford. A celebration of Golda’s life will begin at 2:00 pm. Interment will follow in New River Cemetery.

The Reed family is in the care of Mullins Funeral Home & Crematory in Radford. www.mullinsfuneralhome.com