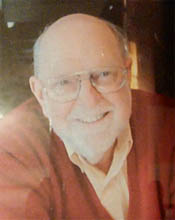 Bruce Earl Reed, 72, passed away peacefully on Wednesday, March 12, 2014. He was born September 24, 1941, in Sylva North Carolina, and grew up in Waleska, Georgia. He attended Reinhardt College and the University of Georgia, from which he received a Doctorate in Mathematics. In 1967, he moved to Blacksburg and began a 36-year career as a Mathematics professor at Virgina Tech. At Tech, he was highly regarded for his teaching ability, winning several awards, including the Wine award for Teaching Excellence in 1995. He retired in 2003. He was a long time member of Glade Church in Blacksburg, serving as its treasurer for many years. He loved sports, and rooted passionately for the Atlanta Braves, and of course the Hokies. Most of all, he was an extraordinarily devoted husband and father. He is survived by his beloved wife of 48 years, Elaine Long Reed, of Blacksburg, and by his son, Stephen Bruce Reed, of Woodbridge, Va. He is also survived by his grandchildren, Laurel Elaine Reed and Nathan Richardson Reed. The family wishes to especially thank the Blacksburg Volunteer Rescue Squad, the staff at the Lewis Gale Medical Center in Salem, and the staff at the Progressive Care Unit at the Carilion New River Valley Medical Center. A memorial service will be held Saturday, March 15, 2014 at 2:00 pm in the Glade Church with Rev. Catherine Rolling and Rev. Kelly Sisson officiating. In lieu of flowers, the family suggests a contribution in Dr. Reed’s memory to either Blacksburg Volunteer Rescue Squad, 200 Progress St., Blacksburg, VA 24060 or Glade Church, PO Box 11565, Blacksburg, VA 24062. The family will receive friends from 5-7:00 pm Friday evening at McCoy Funeral Home, 150 Country Club Drive, SW, Blacksburg.