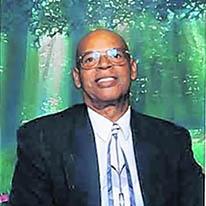 Samuel James Redmond, age 81, of Christiansburg, Virginia, passed away Thursday, May 1, 2014, at MedStar Southern Maryland Hospital Center, after an extended illness. He was born in Montgomery County, Va., October 19, 1932, a son of the late Earl and Louise Redmond. Also preceding him in death were his brothers, Tommy and Raymond; and sisters, Dorothy, Mary Francis, and Marie Redmond.

He is survived by his beloved wife of 11 years, Trinda Redmond, of Christiansburg, VA; his loving children, Chamisa Redmond, Natasha Redmond, Demetrius Redmond; and his cherished grandchildren, Logan Davis, Mikial Redmond, Demetria Redmond, Anjelyca and Makala Nash, and Samuel Fatima. He is also survived by a host of aunts, uncles, cousins, nieces, nephews and godchildren.

The family will receive visitors at Greater Mount Zion Holiness Church, 385 Depot Street, NE, Christiansburg, VA, at 2:00 pm, Sunday, May 11, 2014, before a Celebration of Life Service. The memorial service will begin at 3 pm.