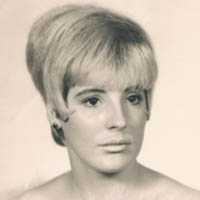 Sandra Ann Doyle Ratcliffe, 64 of Pearisburg, VA went to be with the Lord on Monday, August 4, 2014 at Carilion Giles Community Hospital in Pearisburg. Sandra was born on June 2, 1950 and was a daughter of Cecil Richard Doyle of Pearisburg and the late Maxine Pyles Doyle.

Sandra was a graduate of Giles High School in Pearisburg, was a former manager at Hardee’s in Hopewell, VA and was an avid gardener and a lover of animals.

Besides her father, she is survived by one daughter, Andrea Kreps and husband Kip of Roanoke, two brothers, Richard Eugene Doyle of Roanoke and friend Bev Fuller of Pearisburg, Robert Lee Doyle and wife Cindy of Colonial Heights, Va. and many nieces, nephews and aunts who will miss her dearly.

Graveside funeral services will be conducted Thursday, August 7, 2014 at 11:00 am at Angels Rest Cemetery in Narrows, VA with the Rev. Dr. Brian Burch officiating. Online condolences can be sent to givensfuneralhome.com