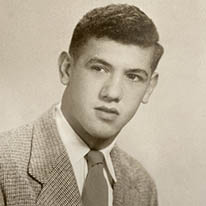 Montie “Buddy” Ratcliffe, a true southern gentleman, entered into eternal rest on April 16, 2022. Born in Pulaski, VA, he was the second son of six children born to the late Raymond Francis Ratcliffe and the late Ruth Hall Ratcliffe on February 15, 1929.

Montie was a family man who spent lots of time with his daughters, grandchildren, and most importantly “his Betsy.” As a young man, any and all sports were Montie’s first love, and his enthusiasm for them started very early and never waned. He played every sport imaginable and, in his words, he “excelled in all of them.” In later years, Montie recounted many adventures that involved the Ratcliffe siblings playing tennis, ice skating, sledding, and skiing around their house in the Pulaski area.

Throughout elementary and all through high school he played just about every school sport, however, it was well-known among family members that his all-time favorites were always football and golf. His passion and utter enjoyment of football and golf continued throughout his last years of life. Because Montie was instrumental in introducing these sports to his children and grandchildren, they will be enjoyed by his family members for years to come.

After graduating high school, while still in Pulaski, he met his future wife who was teaching school. They married in 1950 and had their first daughter, Denise Ratcliffe Schneider in 1951. During his early married life, Montie attended classes at Bluefield College for a year then transferred to his beloved Virginia Tech in Blacksburg, VA. Here he earned his Bachelor of Science in Mechanical Engineering, and subsequently began a long and successful career with McDonnell Douglas.

Montie’s first job was with Douglas Aircraft in Long Beach, CA, where he spent two years. While in CA, he longed to get back to the south and in 1957 he was granted a transfer back east to Charlotte, NC. There Montie and Betsy had their second daughter, Debbie Ratcliffe Zeitz. The family spent nine years in Charlotte, but would eventually return to CA. This time they settled in the Westwood area of Los Angeles. They remained in Los Angeles for 23 years.

Throughout Montie’s time as an executive for McDonnell Douglas, he worked on and led many projects, some of which were the Nike Hercules missile, the transportation of liquefied natural gas, the Mast Mounted Sight for helicopters, and designing commercial aircraft. One of the highlights of his career was receiving an invitation to, and attending the prestigious think tank, Brookings Institute, in Washington, DC. In 1987 Montie and Betsy moved to the Houston, TX area to be closer to their two girls who lived at the time in Dallas and Houston. Montie began what would become his final project for McDonnell Douglas. He accepted a position at NASA as the Deputy Director of International Space Station for McDonnell Douglas. He stayed at NASA until his retirement at age 65.

While living in Houston, the couple purchased a summer home in the town of Blowing Rock in the mountains of North Carolina. Their time there was one of the highlights of their lives. They absolutely loved the beauty of the Blue Ridge Mountains where they were raised, and enjoyed golf, friends, and the close proximity of extended family. Blowing Rock would eventually become their permanent home and the site of many fun family gatherings. Eight years ago in 2014, Montie and Betsy made the move to Longhorn Village in Austin, TX to be closer to their daughters.

Montie’s legacy will certainly live on through his family. He was a very special man that made a big impact on many lives. We will always remember his strength of character, his love of family, his witty personality, and his unfailing sense of humor. Even in his final stages of dementia, humor never left him. As best said by a grandson, “Grandad had the best attitude and was the happiest person I’ve ever known.” He was our “rock” and we will never forget him.

The family would like to thank all the staff at Longhorn Village in Austin, especially Lydia Casillas, for the excellent care he received while a resident there.

Graveside services will be held Saturday July 23, 2022 at 11:00 a.m. at Oakwood Cemetery in Pulaski, VA. In lieu of flowers, please honor Montie through memorial donations to the Raymond F. Ratcliffe Transportation Museum, www.theratcliffemuseum.com.