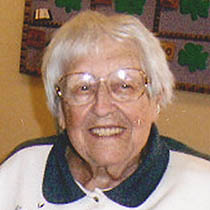 She was retired secretary with Williamson Oil and a longtime member of the Order of the Eastern Star. She was a faithful member of Central United Methodist Church for over 70 years.

She was preceded in death by her parents, Benjamin and Florence Lawson; her husband, Aubrey T. Ratcliffe; her brothers, John, Haven, James and Ernest Lawson; and sister, Leona Ratcliffe.

Survivors include her nephew and his wife, Ronald L. and Linda Lawson of Radford; niece, Geneva L. McKenney of Richmond; special great nephew and nieces, Robert Lawson, Ronda London and Rebecca Tapp, all of Radford; and many other relatives and friends.

Graveside services will be held at 10 a.m. on Thursday, April 6, 2017 at Sunrise Burial Park in Radford with Rev. Don Shelor officiating.

In lieu of flowers, the family requests that contributions be made to the Central UM Church Building Fund, 803, Wadsworth St., Radford, VA 24141.

The Ratcliffe family is in the care of Mullins Funeral Home & Crematory in Radford. www.mullinsfuneralhome.com.