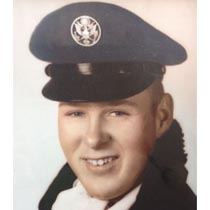 Robert “Bobby” Banford Ratcliffe, III, 77, passed away Saturday, March 26, 2016 at his home in Belspring. He was a member of Gethsemane Baptist Church and a U. S. Air Force veteran.

He was a machinist by trade but a talented craftsman who could make anything with his hands. He was an avid fisherman and woodworker.

He was preceded in death by his parents, Robert Banford Ratcliffe, Jr. and Edna Walker Ratcliffe, and his son, Donald Lynn Ratcliffe.

The family will receive friends from 5 until 7 p.m. Monday, March 28, 2016 at Gethsemane Baptist Church in Radford. Memorial services will begin at 7 p.m. with Pastor Jerry Gibson and Pastor Russell Gordon officiating. Interment with full military honors will be held at 10 a.m. on Tuesday, March 29, 2016 at the Southwest Virginia Veterans Cemetery.

Flowers will be accepted or in lieu of flowers, please make contributions to the Leukemia Society, American Cancer Society or your favorite charity or church.

The Ratcliffe family is in the care of Mullins Funeral Home & Crematory, Radford, Virginia. www.mullinsfuneralhome.com