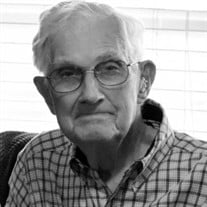 George Calvin Ratcliffe of Pilot, Virginia went to sleep in Jesus Wednesday, June 1, 2022, at the age of 97. After several months of declining health, George died with his family by his side.

George was born in Snowville, Virginia on August 22, 1924, to Waddy and Nannie (Roop) Ratcliffe. The oldest of five sons, George was self-educated and diligently worked on the family farm. George’s work ethic and dedication to life-long learning was an inspiration to everyone who knew him. As a young man his family moved to Pilot in 1943 where he met Dorothy Leigh Bond. They married in 1948. George was a body and fender mechanic and retired from Holiday Ford as the body shop manager. George was a faithful member of the Seventh-day Adventist church for 69 years and spent his spare time gardening and woodworking.