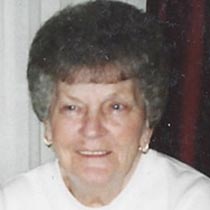 Dorothy Suttle Ratcliff, 88 of Rich Creek went home to be with the Lord on Thursday, March 24, 2016.She was born in Peterstown, W.Va., on June 16, 1927, and was the daughter of the late William and Margaret Ballard Suttle.

In addition to her mother and father, she was preceded in death by her husband of over 30 years, John Alfred Ratcliff; four brothers, William, James, David and Raymond Suttle; and three sisters, Inez Thompson, Patty Brotherton, and Bonnie Mullins. She was also preceded in death by a step-daughter, Dorothy J. Mascaro.

Dorothy loved cooking and working with flowers. A loving wife, mother, grandmother, great-grandmother, sister and friend, she will be dearly missed by her family and many friends.

Funeral services will be held Monday, March 28, 2016, at 1 p.m. in the Chapel of Riffe’s Funeral Service in Narrows with Tony Reed, Minister, officiating. Burial will follow in Fairview Cemetery in Narrows. The family will receive friends at Riffe’s Funeral Chapel Monday from 11 a.m. until just prior to the service.