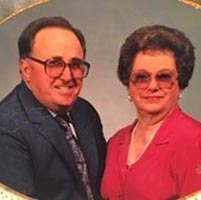 I have fought a good fight, I have finished my course, I have kept the faith. 2 Timothy 4:7

George (GL) Lee Rash, 93, of Dublin, went to be with his beloved wife of 68 years, Marie Rash, on Wednesday, August 14, 2019. He was born in Wythe County on December 28, 1925, to the late Thomas Clinton and Minnie Laphew Rash. He was preceded in death by his 4 sisters, Myrtle Bell Dobbins, Virginia Thomas, Margaret Southern and Blanche Marshall and his 7 brothers Earnest, Troy, Ralph, Robert (Bob), Paul, Silas and Saunders Rash.

George was a member of Dublin United Methodist Church where he was an usher for many years. He graduated from Pulaski in 1943 and VA Tech in 1966 with a degree in electronics. He was a U. S. Army veteran having served during WWII where he was a POW from Jan. 9 until April 15, 1945, and the Korean Conflict. He received many awards and citations for his services and enjoyed being honored in 2016 at the July 4th celebration in Pulaski County and in 2017 in appreciation for serving in WWII. He was a life member of the V.F.W. in Pulaski, American Legion Post #7, D.A.V., and the Seventh U.S. Infantry Regiment Association “The Cottonbalers”.

He worked for RCA, Hercules and GE in Waynesboro, Va. and was a government DLA inspector from 1966 until he retired in 1986. While working for the government as a DCASMA-Pittsburgh, he received many awards and was invited by NASA to watch an Apollo mission launch with the astronauts.

He was a devoted husband, Dad, Granddad and PawPaw Rash and was the patriarch of the family, keeping in touch with family, along with his nieces and nephews. They will miss his nightly phone calls, “making sure they got home okay so he could sleep better”, and all the advice, wisdom and knowledge he bestowed on them. He also called and checked on his friend and fellow Army buddies. George faithfully read his Bible daily and loved to work Sudoku puzzles, which always seemed to be “way too easy.”

In lieu of flowers, the requests that contributions be made to St. Jude Children’s Research Hospital, 501 St Jude Place, Memphis, TN 38105.

The Rash family is in the care of Mullins Funeral Home & Crematory in Radford. www.mullinsfuneralhome.com