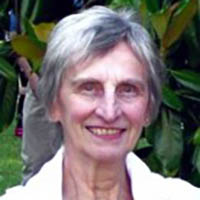 Dolly was a first generation American, born in Dayton, Ohio on July 26, 1932, to the late LTC John Zakota and Julianna Papp Zakota, who had immigrated to the United States from Hungary.

Dolly attended the Holy Name Catholic School and Church, known at that time to be at the center of a thriving Hungarian community. She graduated from Julienne High School in 1950 and earned a secretarial diploma from Miami-Jacobs College in 1951. During her early years, Dolly developed lifelong friendships and made regular trips back to Dayton for more than seventy years to enjoy time with those dear friends.

Dolly married Lincoln Randolph in 1953, and their 27-year marriage took them on a journey from Ohio to Utah, finally settling in Christiansburg, Virginia in 1966. Together they had three children. After her children were grown, Dolly began employment as a secretary and office manager at Eleven West, a graphic design and screen printing business in Fairlawn, Virginia. In 1983 she began her secretarial career at Virginia Tech in the Educational Technologies Division and was later promoted to Fiscal Technician for Video/Broadcast and Media Services, a position she held until her retirement in 1998.

Dolly loved country music, dancing, painting, hosting parties, and spending time with her friends and family. She spent her retirement years maintaining her home and tending to her flower gardens and beloved felines. She enjoyed exercise classes at the Rec Center, theatre performances at Virginia Tech, craft fairs, kissing frogs, drinking martinis, and numerous other shenanigans with her friends.

In 2002, she had the wonderful experience of visiting her mother’s childhood home in Szikszo, a small town in Northern Hungary.
Dolly’s greatest joy of course, was her family. Despite the often-turbulent process of raising her children, she was always there to offer love and support, or a glass of wine, or gin, if neither of the former was sufficient. She especially adored her grandchildren- cherishing the time spent with them during holidays and birthdays, and attending their soccer games, dance recitals and graduations with unabashed pride.

Dolly was preceded in death by her daughter, Nickee Randolph. She is survived by her daughter Terry Randolph Brown and son-in-law Terry Brown (of Collierville, TN), son Jay Randolph and Laura Homokay (of Whitman, MA), and grandchildren, Julie Brown, Erin Brown and Eli Randolph. She is also survived by her sister Patricia Hecker, son-in-law Kevin Cowger, and several nieces, nephews and cousins.

A private family celebration of life is planned for late July, around what would have been Dolly’s 90th birthday.

In lieu of flowers, memorial donations may be made to the Baptist Reynolds Hospice House, or local Humane Society, animal shelter or rescue group.