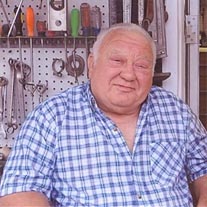 Morris loved working around his place – hunting, fishing, and raising a garden and his grandbabies. He enjoyed going to the Little Country Store and sitting around with his buddies in the Liars Club talking about stuff. Give him something that was broke down and wouldn’t work, and in no time he would get it going again. He loved to tinker and piddle around his shop. He fought a hard battle with his health but he accepted God in his life and was ready when He called him Home.