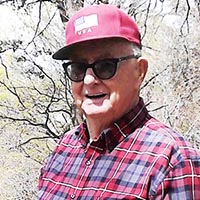 Howard S. Raines, age 91, passed away on Monday, April 20, 2020, at the Springfield Center in Lindside, WV. Born December 15, 1928, in Zenith, WV, he was the son of the late Fred Marshall and Gertrude Elvira Amos Raines.

Howard was a member of the Rock Camp United Methodist Church and retired from Celanese in Narrows, VA, after working there for 40 years. Additionally, he enjoyed farming and doing handy work for everyone in the community. He was a beloved father, grandfather, brother, and uncle.

In addition to his parents, he was preceded in death by his wife, Vidella Ruth Martin Raines; one son, Glen Raines; and one brother, James Clifford Raines. Survivors include two sons, Buck Raines, and Seven Raines and Joyce, all of Zenith, WV; one daughter-in-law, Della Raines, of Christiansburg, VA; one brother, Ray Raines of Peterstown, WV; two sisters, Louise Houchins of Peterstown, WV, and Kathleen Looney and husband Denny of Roanoke, VA; two grandchildren, Dusty Raines and wife Megan of Peterstown, WV, and Jennifer Raines of Roanoke, VA; two great grandchildren, Ellanor and Rowen Raines; and several nieces and nephews.

In lieu of flowers, the family requests that memorial contributions be made in Howard’s name to the Springfield Resident’s Fund (10797 Seneca Trail S. Lindside, WV 24951).

Online guestbook can be signed or condolences may be sent to the family at www.broyles-shrewsbury.com.