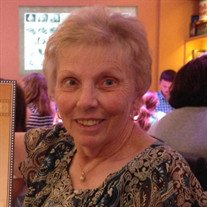 (Margaret) Lorraine Raiden, 74, passed away on April 22, 2021, following a long battle with a neurological illness. Lorraine was born on September 15, 1946 in the District of Columbia to parents Bernard Roache and Frances Roache.

She is survived by her husband of 52 years, Elwyn Glenn Raiden Jr., and children Michael Glenn Raiden (wife Erica Raiden) who reside in Herndon, VA; and Renee Raiden Boyer (husband John Boyer) who reside in Blacksburg, VA. Lorraine and her husband, Glenn spent most of their life in Northern Virginia, first in Springfield, VA, then later retiring to Philmont, VA. In June 2020, Lorraine and Glenn moved to Blacksburg, VA.

Lorraine spent her life raising her two children, which involved traveling to numerous sporting events and other activities. She always opened her home to her children’s friends and in some ways her children’s friends were extended family, always welcome, often spending the night, or even accompanying the family on vacations. Perhaps her greatest loves were her two Shetland sheepdogs, Ginger and Brandy. Lorraine will be deeply missed by all who knew her.

The family will hold a private burial service at Westview Cemetery in Blacksburg, Virginia. The family will receive guests during a celebration of her life which will be held at the Hahn Horticulture Garden in Blacksburg at a later date this summer. If anyone feels led to donate in her honor, please consider Northern Virginia Sheltie Rescue (nvsr.org). Arrangements by McCoy Funeral Home, Blacksburg.