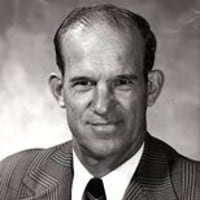 Brown served his country in the United States Army Air Corps from Jan 8, 1942, to March 17, 1946, at which time he received an honorable discharge and came out with the rank of corporal and having been awarded five medals. He re-enlisted April 16, 1948, at which time he was caught up in the Korean Conflict. He rode on the “Midnight Ride” of the 3rd Division and received an honorable discharge with the rank of Sergeant April 16, 1952.

He accepted Christ as his Lord and Savior in 1953 and in 1957 he turned his life over to full time service for the Lord. He entered Piedmont Bible College September 21, 1959, where he graduated in the spring of 1962. While in college he served as interim pastor for Auburn Baptist Church. In 1962 he accepted a call to pastor First Baptist Church in New Castle, Virginia. He moved his family to New Castle, Virginia in July of that year. Later he founded Lighthouse Baptist Church where he continued to serve the Lord for the remainder of his life.

In lieu of flowers, the family requests that donations be used to further the gospel of our Lord and Savior, Jesus Christ, to the recipient of your choice.