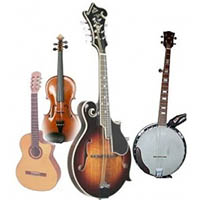 Davy Eugene (Gene) Quesenberry, of Christiansburg, passed away on the morning of January 3, 2009, at his home. Gene was born July 24, 1936 to Algin Carl Quesenberry and Erma Hollandsworth Quesenberry, who preceded him in death. Preceding him also are his sisters, Verna Dalton and Gertrude Cox, his brother-in-law, Elmer Cox, his sister-in-law, Lorene Quesenberry, and father-in-law, Esker Wade.

Gene was known for working on phones and televisions and playing the banjo. Over the years he enjoyed playing with, and making friends with lots of musicians. His last band was “Wildfire Trio” consisting of himself, his wife, and his very true friend, Jerry Surface. Gene also leaves behind many friends and co-workers within the Montgomery County School System where he retired in 2003.

Funeral services will be held 3 p.m. Tuesday, January 6, 2009 at Maberry Funeral Home, officiated by Elder Larry Hollandsworth and the Rev. Jimmy Cannaday. Interment to follow in Big Sand Cemetery, Indian Valley, Va. Visitation will be from 1 to 3 p.m. prior to the service. Online condolences may be sent to www.maberryfuneralhome.com