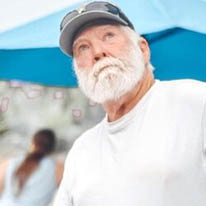 Robert Calvin Pullen “Grizzly” 72 of Rich Creek, Va was called to his heavenly home on June 27th, 2022 surrounded by his family. Born in Newport News, Va on March 12,1950 to the late John William Pullen of Kentucky and Doris Mae Poe of Lynchburg, Va.

Grizzly attended the Virginia School for the Deaf and worked as a Civil Service Carpenter at Fort Eustis in Newport News, Va. From there he became a “Jack of all trades”. He was an avid saltwater fisherman and found a new love for catfishing on the New River. He loved bowling and playing pool. He could tackle any job, big or small and show anyone the ropes while doing it. From a man of many talents he was also a loving and caring man. From his funny moments and random outbursts of jokes, to his compassion and love for others. He touched so many lives on this earth.

He is preceded in death by his sister Victoria Celis and his loving companion of 7 years Fannie Ratcliffe.

A guestbook is available by visiting www.kendallfuneralhome.com. The staff of Kendall Funeral Home are honored to serve the Pullen Family.