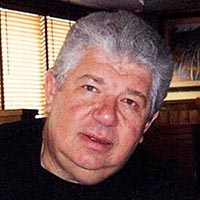 Danny Psathos, 73 of Pearisburg, VA went to be with the Lord on Friday, June 21, 2019. Danny was born on March 31, 1946 in Pearisburg and was a son of the late Harry and Jennie Long Psathos. Besides his parents, he was preceded in death by his father and mother in law, Peyton and Mary Lee St. Clair, brother-in-law, Marshall Page.

Danny was a 1964 graduate of Narrows High School, the owner of Danny’s Barber Shop, and retired from the DMV with 35 years of service. He was the proud owner of Haney’s Bingo Supply where he was affectingly know as Mr. Haney. Danny loved life, never met a stranger, and loved joking and making people laugh.

He is survived by his wife of 52 years, Linda Kay St. Clair Psathos; one daughter, Kimberly Kay Psathos and her friend Dean Robertson; one brother, Anthony G. Psathos (Trish) of all of Pearisburg; sister, Mary Anna Page of Roanoke; brother and sister-in-law, Mack and Debbie St. Clair of Peterstown, WV, numerous nieces, nephews, great nieces and nephews and many other family and friends.

Funeral services will be conducted Monday, June 24, 2019 at 2pm at the First United Methodist Church in Pearisburg with the Rev. Gary Poff officiating with burial following in the Birchlawn Burial Park in Pearisburg. The family will receive friends at the First United Methodist Church two hours before the service from 12 – 2 pm. Online condolences can be sent to the family at givensfuneralhome.com.