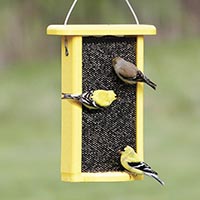 Mary Irene (Leach) Propst of Christiansburg, Virginia went home to be with the Lord on Wednesday, October 1, 2014. She was born May 19, 1929 in Augusta County, VA, to William R. Leach, Sr. and Mary L. Botkin.

She was married to Albert Ervin Propst in 1948 and celebrated their 58th anniversary before his death in 2007.

Mary’s early years were spent growing up and working on a farm in Highland County, Virginia. Later she attended Beverly Manor High School in Staunton, Virginia where she excelled in her studies, cheerleading and basketball. During her years residing in New Hope, Virginia, she was active in Cub Scouts, serving as Den Mother for many years and organizing many events for Cub Scout Pack 86, New Hope, VA. In Christiansburg, she enjoyed many years of bowling in the Golden Years Bowling League.

She had many passions in the local area. One was her employment in the New Life Christian Bookstore, where she developed many long-lasting friendships. She was also passionate about community service. She was a hospital volunteer, led Bible Study classes at Heritage Hall and Warm Hearth, provided caregiving services for several elderly residents of Christiansburg and was an active member of the Christiansburg Church of the Brethren, participating in many activities including alter preparation and teaching Sunday School.

She loved gardening and flowers. At her Christiansburg residence, her neighbors envied her beautiful and neatly kept yard, to which she devoted countless hours. She loved the mountains, the Blue Ridge Parkway and the birds that adorned her numerous birdfeeders. Her sole mission later in life was to tell others about Jesus Christ.

The Visitation will take place at Horne Funeral Home on Saturday, October 4, 2014, from 3 to 5 p.m. The Funeral Service will be held at the Christiansburg Church of the Brethern at 2 p.m. on Sunday, October 5, 2014. Burial will follow in Sunset Cemetery in Christiansburg.