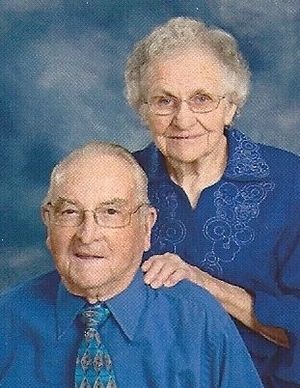 James Earnest Proffit, 90, born August 24, 1924, went home to be with his Lord and Savior on Sunday, January 4, 2015 surrounded by his loving family, following a battle with COPD and lung cancer.

James entered the Navy during World War II on November 6, 1943 and was discharged on November 16, 1945. He was aboard the ship USS Thurston serving in Normandy on D Day and Southern France invasions. After his discharge from the Navy he returned home to Floyd County to help his Daddy on the farm for a short while.

On November 24, 1946 he married the love of his life, Frances Sowers. They moved to Vinton where he worked in a filling station until returning to Floyd County in 1950 and bought a farm. He made his living farming and gardening, both which he was very good at, and loved. He also loved to hunt and fish in his spare time. James was baptized into the Red Oak Grove Church of the Brethren in October of 1953 and was a Deacon there many years.

James was preceded in death by his parents Getter and Alberta Proffit; and 11 of his twelve siblings.

James’ family is deeply grateful for the care and compassion shown to them by Intrepid Hospice and their church family at Red Oak Grove Church of the Brethren.

Funeral Service will be at 11 a.m. Thursday, January 8, 2015 at Red Oak Grove Church of the Brethren. Officiating will be the Rev. Hebron Quesenberry, the Rev. Marvin Wade and the Rev. Jimmy Cannaday. Interment will follow in Restvale Cemetery with Military Rites by Floyd V.F.W. Post #7854, American Legion Post #127. Visitation will be 6 to 8 p.m. Wednesday, January 7, 2015, at Maberry Funeral Home.

Online condolences may be made by visiting www.maberryfuneralhome.com