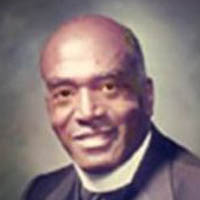 Elder David A. Powell, Sr., of Floyd, formerly of Roanoke, completed his earthly task on Thursday night September 3, 2015 at UVA Medical Center, Charlottesville, VA. He was born in Roanoke, VA on July 29, 1924 to the late Walker and Margaret Powell.

He was preceded in death by his wife, Mary M. Powell; brother, William D. Powell; and sister, Jeanette Ford.

He graduated from Lucy Addison High School in 1941, attended Tuskegee University and served in the U.S. Army during World War II. He was pastor of Faith Temple Church of God in Christ for 61 years; Superintendent of the Roanoke District 2nd Jurisdiction of COGIC, VA; Chairman of the National Adjutant Board; he received his honorary Doctorate of Divinity from Norfolk State University; member of Floyd County Ministerial Alliance; and member of the Roanoke Branch NAACP.

Those left to celebrate his life are three sons and one daughter, David A. Jr. (Norma) Powell, Andrew L. (Lois) Powell, Percy A. Sr. (Vandelia) Powell and Mary J. Powell, all of Roanoke, VA; his wife, Rosa Powell and her children, Theron Calfee, of Macon, GA, Terri Calfee, of Floyd, VA, Teresa (Sherman), of Christiansburg, VA, and Tammy Calfee, of Alburquerque, NM; a host of grandchildren, great-grandchildren, nieces, nephews, other relatives and friends.

A Memorial Service will be held 7 p.m. Wednesday, September 9, 2015, at Holiness Tabernacle COGIC, 1120 Melrose Avenue, Roanoke, VA. Visitation with the family will be one hour prior to the Memorial Service.

A Homegoing Service will be held noon Thursday, September 10, 2015, at Holiness Tabernacle COGIC. Interment will be in Sherwood Memorial Park with military honors by VFW Post 7854 and American Legion Post 127. Arrangements by Hamlar-Curtis Funeral Home. Condolences may be sent to www.Hamlar-Curtis.com.