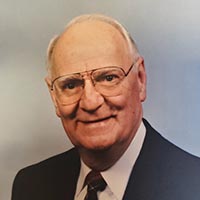 Dr. Winsdon N. Pound, Ed. D, 98 of Pulaski, died peacefully on August 29, 2020. He was born in Lynchburg, VA on August 25, 1922 and was the son of the late James Malcolm and Mary DeForrest Pound. He was also preceded in death by his loving wife of 54 years, Madeline Spencer Pound and by nine siblings.

Dr. Pound was a lifelong educator and influenced thousands of children. He worked as a teacher and a principal for thirty-three years, most notably at Dublin Elementary School. After retirement, he served for twelve years as the Director of Community Education at Saint Albans Psychiatric Hospital. He was also an adjunct professor at Radford University.

Dr. Pound’s own education included a B.A. in education and psychology from Lynchburg College, a M.A. in elementary education from UVA, and the Certificate for Advanced Graduate Studies and an Ed. D in educational administration from Virginia Tech.

Dr. Pound helped to organize and lead the Pulaski County Alcohol and Drug Task Force. Through his position with this group and Saint Albans Psychiatric Hospital, he made presentations to over 300,000 children and adults on alcohol and drug abuse, peer pressure, self-esteem, suicide prevention, parenting and related topics.

Dr. Pound and wife, Madeline, were faithful members of Dublin United Methodist Church for many years. He also served his country in the Army during World War II.

A graveside service will be held Saturday, September 5th at 11:00 AM from Dublin Cemetery (Maple St./Cemetery Rd.), Dublin with Don Hanshew, Don Shelor and Tal Stanley officiating. Visitation will be Friday evening at Stevens Funeral Home where the family will receive friends from 6:00 until 8:00 PM. In lieu of flowers the family wishes memorials be made to Dublin United Methodist Church, P.O. Box 577, Dublin, VA 24084.

(Masks and social distancing are to be honored during Friday night’s visitation at the funeral home and the graveside service on Saturday.)