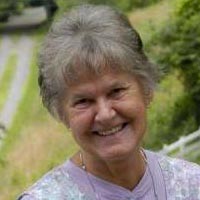 Dana Poteet Porterfield, 84, surrounded by family went to be with our Lord on Thursday, October 8, 2020 after suffering a brief illness at Lewis Gale Montgomery Hospital. Daughter of the late Gurthie Edgar Poteet and Sadie Osborne Poteet of Bluefield VA.

Dana was a graduate of Graham High school where he was highly active in the band and sports. She was an accomplished drum major and captain of the basketball team who loved competition and giving all she had for the “G-Men”. After high school, she worked at the Bluefield Hospital and supported her education at the business school. Once married, she quicky mastered the art of homemaking, milking cows, canning, sewing and tending the garden and orchard.

Her greatest accomplishment was her unsurpassed ability to care for her family. Early on it was her children who she bestowed the importance of faith, love, and how to be compassionate for others. Later, it was caring for her mother-in-law and babysitting for the local teacher’s son. Lastly in life, caring for her grandchildren and spending time with her great grandchildren was her greatest pastime. She cherished every minute she could spend spoiling them and never turned down an opportunity for a sleepover or extended stay. To her grandkids, “Mawmaw’s house and kitchen was always open.”

Beyond family she enjoyed spending days with the “lunch bunch” and participated in the Virginia Local and State Senior Olympics where she was a multisport, multi gold winner for nearly two decades. She also was a lifetime member of the Newport Agriculture Fair where she directed the Miss Newport Pageant for over 30 years. She was proud to have both of her daughters and a granddaughter crowned as Miss Newport.

She was a lifelong member of Sherry Memorial Christian Church and its CWF program where she helped with fundraising, providing meals, and delivering fruit baskets for many. She was a curious learner and used her sense of humor in search of the elusive stranger even through her last day.

Online condolences may be sent by visiting www.kendallfuneralhome.com. The Staff of Kendall Funeral Home are honored to be serving the Porterfield family.