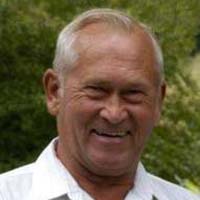 Bobby Frank “Juice” Porterfield, 85, went to be with our Lord on Tuesday, April 14, 2020 at his family farm in Newport, Virginia.

Bobby was a honor graduate of Newport High school where he was highly active in agriculture and served as the Virginia Ambassador at the FFA National Convention. He was a talented baseball player and lover of the game where he developed the nickname “Juice” to which many old friends still call him. A lifelong farmer, Bobby showed a love for growing many things besides his family. After serving in the Army and following his Dad’s footsteps as a dairy farmer, he became the local “milkman” picking up cans and delivering them to the creamery. He switched to beef cattle and was the first to bring the Charolais breed to Giles County.

Shortly after he began work at Poly Scientific (now Moog) as a machinist and retired there after 30 years. Aside from the love of beef cattle production, he enjoyed beekeeping, raising a garden, tending to his orchard, and operating his sawmill. He was a highly skilled wood carpenter, rock mason, machinist, and gardener. He was best at being a teacher, a supervisor and a mischievous prankster. In retirement, he enjoyed being outside in the sunshine and spending time with his grandchildren and maintaining control of the remote.

He was lifelong member and elder of Sherry Memorial Christian Church in Newport where he used his talents building the rock church sign and many other projects. His favorite day was Sunday when he could sit on the porch or back pew to fellowship with family and friends.

Kendall funeral home in Pembroke VA will handling the arrangements. Online condolences can be sent to KendallFuneralHome.com