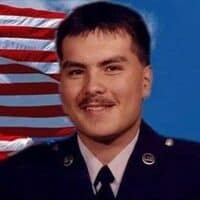 James William Porter, 48, died on Thursday, October 21, 2021 following a brief illness. He was born in Beckley, WV on October 29, 1972 to James R. Porter and Sun Cha Song. He was greatly cherished and well raised by his grandparents, Robert and Loraine Porter.

James was a proud Veteran of the US Air Force having served a tour in the Middle East. In civilian life, he worked in finance for several health care providers and most recently as the Chief Financial Officer for Mount Regis Center. However, his favorite job and the one he was best at doing was being a dad to Corey, Megan, Aric, and Matthew. James kept them close during many of life’s tribulations, was their staunchest ally and fiercest advocate, inspired within them the spirit of service to others, and absolutely relished every second he got to spend in their company. Although his last days were painful for everyone who loved him, they were some of his happiest because he had all of his children under one roof again. James leaves behind a legacy of kind and decent kids. It was a life well lived.

James was proceeded in death by his father, grandparents, and brother Chris. Those left to mourn his loss and honor his memory include his four children Corey Porter (Abby Allison) of Columbus, OH; Megan Noland (Josh) of Marion, IN; Aric Porter of Woodlawn, VA; and Matthew Porter of Ft. Bragg, NC. James was fortunate to get to spend the last few years of his life in the company of the person with whom the thought of made him smile and whose presence gave him strength, Stephanie Lester of Crab Orchard, WV. He is also survived by his mother, Sun Cha Song, his brother, Peter, and sister, Haena, of NJ. He will be greatly missed by his aunts, Tammy Nicely and Debbie Acord and uncles Danny and Bob Porter.

There will be a private viewing for family and close friends at 9:30 am on Friday, October 29, 2021 at the Bower Funeral Home in Pulaski, VA. Following visitation, a graveside service will be held for all who want to attend at 11:00 at the Southwest Virginia Veterans Cemetery in Dublin, VA. The family would like to invite all of James’s family and friends to attend a celebration of his life which will be held at 4:00 pm on Friday, October 29, 2021 at the Old Grove Chapel in Crab Orchard, WV. In lieu of flowers, please honor James’s memory by carving a day from your life’s busy schedule to do something fun with your children (preferably by the water and even if your children are old).

To sign his online guestbook, visit www.bowerfuneralhome.com – Bower Funeral Homes, Pulaski is handling the arrangements for the family.