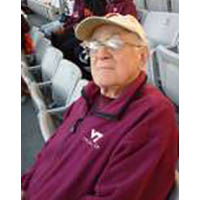 William “Bill” Harry Pletta was born Feb 14th 1938 in Forrest Park, IL to William and Dorothea Pletta. He died on August 6th, 2020 from COVID-19. Bill was preceded in death by his parents and his son Kevin.

Bill is survived by his wife of 60 years, Eleanor “Jimmie”, his daughter Leslie and her husband Tim, granddaughter Rachel, son Bryan and his wife Cristina, and sister Carol and her husband Phil.

Bill and Jimmie met on a blind date while he was attending VA Tech and she was at Radford College. The all male student body at VA Tech and all female Radford students often got together for dances on the weekend. It was a match for life.

Bill was an avid sports fan who loved supporting VA Tech football, Go Hokies!, as well as his beloved Chicago Cubs and Bears. He would even root for the Clemson Tigers as long as they weren’t playing against Tech.

Bill was very involved in his church at University Lutheran in Clemson. One of his favorite things was doing the annual BBQ dinner for the Clemson Lutheran Campus Ministry. It was always one of the best attended dinners and there were never any left-overs. He served as president on the church council and helped with Habitat for Humanity builds. He loved to tell stories and laugh with friends and family.

Bill worked for JP Stevens as an Industrial Engineer for most of his working life and retired in 2000. He enjoyed meeting with his former co-workers for lunch once a month for laughter and memories. He was meticulous with finish carpentry and did most of the finish work on three houses that he built. His son Bryan once claimed that he was an “apprentice to the amateur” while helping his dad on the first of these projects.

Donations to a memorial fund in Bill’s name can be made to University Lutheran Campus Ministries. Make donations to the memorial fund and add “LCM-Bill Pletta” to the comment box. You can also mail a check to 111 Sloan St. Clemson, SC 29631 with the same comment in the memo.