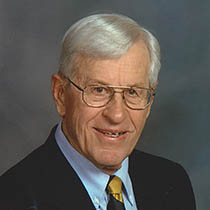 Edward William Pivirotto, Sr. passed away January 14, 2018 at the age of 93. A celebration of life service will be held at 11:00 am, Saturday, January 20, at St. Jude’s Catholic Church, Christiansburg, Va., with a reception afterwards. Online condolences can be left at mullinsfuneralhome.com. Interment with full military honors will be at the Southwest Virginia Veterans Cemetery.

Edward was born August 1, 1926 in Bridgeport, Conn. to Albert and Christina Pivirotto. He graduated from Central High School and earned his associates degree from the University of Bridgeport in engineering and building construction. He proudly served his country during WWII as a navigator in the Army Air Corps. In June 1947, he married the love of his life, Marie Theresa DeGrandi, who predeceased him. They were married 69 years.

Edward began his career as a union carpenter and worked his way up to become the Senior Vice President of Operations for E & F Construction Company of Bridgeport, Conn., one of the 400 largest construction companies in America. Edward and Marie were blessed with a healthy and active retirement spent in Morris, Conn, Hilton Head, S.C. and Blacksburg, Va. Edward was a member of the Knight of Columbus and earned the distinction of the 4th Degree for active Catholic citizenship.

Edward is survived by three sons and one daughter, James and Faith Pivirotto of Shelburne, Vt., Edward Pivirotto, Jr. of South Windsor, Conn., Mary and Arnold Bohanan of Radford, Va., and Michael and Judy Pivirotto of Bluffton, S. C., and eleven grandchildren, and two great grandchildren. He had 3 nieces, and 1 nephew. He was preceded in death by his wife Marie, His brother Arthur, and son Robert John Pivirotto.

The family wishes to convey deep appreciation to the staff and residents of The Crossings of Blacksburg for the compassionate care, love and friendship to both our parents during the last three years. In lieu of flowers, donations can be in the memory of Edward to the Radford Clothing Bank, 2000 West Street, Radford, VA 24141.