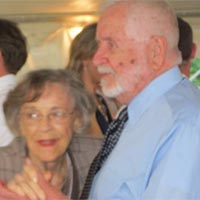 John (Jack) Anderson Pitt, 90, of Blacksburg died unexpectedly from a head injury, Thursday, September 13, 2018 at Kroontje Health Care Center with his oldest son, John by his side, who felt ‘blessed to help him leave this world, knowing he was loved by his whole incredible family’ and ‘pass on to heaven’ to join his beloved wife of 67 years, Barbara Jean Pitt.

He was the only child born in Chicago, Illinois on September 29, 1927 to the late Samuel Pitt and Elizabeth Cummings Anderson Pitt both originally from Kilmarnock, Scotland. Jack graduated from Westfield High School, NJ in 1945 and from Duke University June 5, 1950 and married Barbara Jean Van Houten that afternoon.

He loved to work on cars especially corvettes. After retiring from his career as an industrial sales engineer, sailing became his passion, racing his boat ‘Sirocco’ winning or placing in many races and educating young adults about sailing through the Peace River Power Squadron at Charlotte Harbor, Florida. He cruised to many countries with his final cruise to Cuba last year. He was a lifelong learner taking classes through Virginia Tech, the Police Academy and many Civil War seminars.

As a World War II Navy veteran, Jack often talked of his desire for a burial at sea by the Navy. ‘Sea Fever’ was a favorite of his.

“I must go down to the sea again, to the lonely sea and the sky,
And all I ask is a tall ship and a star to steer her by,
And the wheel’s kick and the wind’s song and the white sail’s shaking,
And a gray mist on the sea’s face and a gray dawn breaking.

I must go down to the seas again, for the call of the running tide
Is a wild call And a clear call that may not be denied;
And all I ask is a windy day with the white clouds flying,
And the flung spray and the blown spume, and the seagulls crying.

I must down to the seas again to the vagrant gypsy life.
To the gull’s way and the whale’s way where the wind’s like a whetted knife;
And all I ask is a merry yarn from a laughing fellow-rover,
And quiet sleep and a sweet dream when the long trick’s over. “ John Masefield

In lieu of flowers, memorial contributions may be made to Warm Hearth Foundation, 2387 Warm Hearth Drive, Blacksburg, VA 24060. Thanks to the wonderful staff at Kroontje Health Care Center for their loving care and helping Jack feel like part of a large family in his short time there.