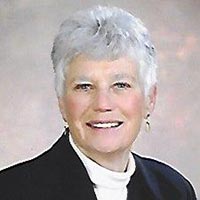 Juanita W. Petrone, 89, passed away peacefully at her home March 30, 2015. Born in Pearisburg, VA on September 19,1925, she was the first daughter of the late Foster Wright and Lila Wright.

She is survived by her husband of 72 years, R.A. “Pete” Petrone , one son Ralph, her youngest brother Richard Lee Wright, and many nieces and nephews. Predeceasing her were brothers Walter Wright, W.F. Wright,Jr, Garland Wright, James Wright, Douglas Wright, and her beloved sister Josephine “Jo” Durham.

Living in Pearisburg and then Blacksburg, she married Pete during WWII. Self taught in golf, she played in numerous tournaments for over 60 years including 50 consecutive years in the Virginia Women’s State Amateur. Her love of golf and her personal interactions created numerous long-term friendships. She uplifted the spirit of all around her as she truly cared about people.This was Juanita’s inherent gift.

In the 1960’s, Juanita began her career at the VA Tech Computing Center. She retired in 1992 as a computer systems analyst yet maintained long lasting friendships with both faculty and staff.

Moving from Blacksburg to their Claytor Lake home, Juanita quickly made friends with her lake neighbors and enjoyed walking around the point just to see and talk with them. She became a member and attended the Dublin United Methodist Church.

The Petrone family is grateful to Juanita’s friends and local neighbors for their help. Special thanks is given to Mary Saul, Mary Ann Harris, Melissa Shelton, Hospice, and private home care personnel.

Visitation will be at the McCoy Funeral Home, 150 Country Club Drive, SW, Blacksburg, on Friday, April 3, 2015 from 6 to 8 p.m. The funeral will be held here at 11 a.m. on Saturday, April 4, 2015 with the Reverend Jay Carey officiating. Interment follows at the Birchlawn Burial Park in Pearisburg, VA.

Those desiring to do so can make donations to the Juanita Petrone Youth Golf Fund c/o The National Bank, 101 Hubbard Street, Blacksburg, VA 24060.