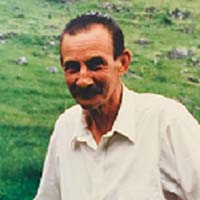 James Harvey Peters (Jim), age 82, of Pembroke, VA, passed away on July 3, 2019 at his home. Jim was born on November, 26, 1936, in Pearisburg and was a son of the late Sidney Levi Peters and Nora Ellen Conley Peters. In addition to his parents, he was preceded in death by one sister and four brothers. Jim was a loving husband, father, and grandfather and greatly enjoyed spending time with his family and friends. He was a very talented musician who played the guitar, banjo, and sang. He also enjoyed walking, fishing and hunting, and couldn’t stand “sitting in the house”. He was a devoted Christian, loved to cook, was a fountain of wisdom, and will be greatly missed. He is survived by his wife of 40 years, Patricia Merle Harris Peters (Patty) of Pembroke, VA, his son, James C. Peters of Lawton, OK (and spouse Diana), his daughters, Charity E. Forbes of Riner, VA (and spouse Chuck), and Rebecca Peters-Patteson of Ripplemead, VA (and spouse Matthew), five grandchildren, Abigail, Daniel, Alexandria, Hunter, and Kylene, and numerous nieces, nephews, and friends. At Jim’s request, he was cremated and no public service will be held. The family will have a private service at a later date. Online condolences can be sent to the family at givensfuneralhome.com.