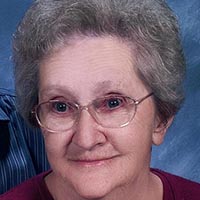 Doris Marie Cannoy Peters, 91 of Ripplemead, VA went to be with the Lord on Sunday, October 6, 2019. Doris was born on April 23, 1928 in Beckley, WV and was a daughter of the late William Preston Cannoy and Nannie Rhea Crigger Cannoy.

Doris grew up in Wytheville, was a longtime member of the First United Methodist Church in Pearisburg, was a former Sunday School teacher and she throughly loved the company of family and friends.

Funeral services will be held Thursday, October 10, 2018 at 11:00am at the Givens Funeral Chapel in Pearisburg with the Rev. Dr. Brian Burch officiating with burial following in the Birchlawn Burial Park in Pearisburg. The family will receive friends at the funeral home one hour before the service. Online condolences can be sent to the family at givensfuneralhome.com.