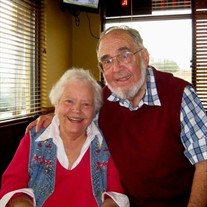 He met Barbara Dana at the University of Colorado and they just recently celebrated their 63rd anniversary on October 26. He moved to Virginia where he continued his education and received his Doctorate in Statistics from Virginia Tech. He retired from the Radford Army Ammunition Plant where he worked for Hercules and assisted in the automaton of the manufacturing of gunpowder. Gene sang tenor in the choir of the Blacksburg United Methodist Church, where he was the Distinguished Toastmaster and Governor of District 66. He was a very loving husband, father, and grandfather. He enjoyed playing video games on his computer and on other devices, working a rubric’s cube, as well as puzzles.