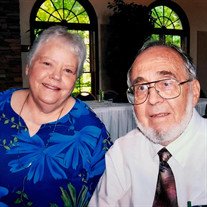 Barbara and Eugene met at the University of Colorado in Boulder where they hung out at the Wesley Foundation. Their relationship grew and they married on Oct 26th, 1957 in Denver and honeymooned in Colorado Springs at Effie’s cabin. Of course, Mickey, Eugene’s brother, woke them up playing trumpet first thing in the morning. Eugene got a job working for Hercules and they transferred to Wilmington Delaware where Barbara gave birth to Cathleen. Later they transferred to Salt Lake City Utah, where Barbara gave birth to David. Eugene transferred to Radford Virginia and they bought a house in Christiansburg, where they raised their children. Once her children were teenagers, Barbara went back to college and got accepted at Radford University where she majored in music and voice. Growing up, her kids often heard her singing bits and pieces of a diverse assortment of music. Barbara was proficient on the piano and accompanied herself at her own graduation recital. She taught piano lessons and sang solos at Blacksburg Methodist Church. As they grew older, Barbara and Eugene moved to Warm Hearth where they were inseparable, even though they lived in separate wings. During COVID they kept in touch by walkie talkie and sneak visits.

“The two of you always seemed inseparable wherever you were seen, you were always together.” Mr. Belva Collins

The visitation will at 1 pm and the funeral at 2 pm on Monday, April 26, 2021 at Horne Funeral Home, 1300 N Franklin St, Christiansburg, VA 24073. The funeral will be live streamed on Facebook. There will be a brief graveside service at Sunset Cemetery in Christiansburg.