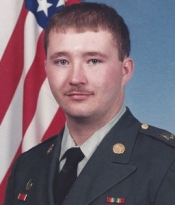 Kelly Ray Perdue, 43 of Narrows passed away Sunday, March 9th, 2014 at Carilion Roanoke Memorial Hospital. A lifelong resident of Giles County, he was born March 18th, 1970, and was the son of Bobby Ray Perdue and Barbara Christian Perdue of Narrows. He was a 1988 graduate of Narrows High School and served in the United States Army during Operation Desert Storm as a military police officer. An avid outdoorsman, Kelly loved fishing, hunting and camping with his daughter, family and friends. In addition to his mother and father, he is survived by a daughter, Chase Christian Perdue; a stepdaughter, Jonna Meade; a sister, Sharron Jones and J.J. Stowers of Narrows; two special nephews, Dale (Bubba) Jones and wife Shalane of Pearisburg, and Ryan (Mudpie) Jones of Narrows; a very special great neice, Harper Skye Jones; several aunts, uncles, cousins, and many special friends. Funeral services will be held Thursday, March 13th, 2014 at 2 PM in the Chapel of Riffe’s Funeral Service in Narrows with Rev. Lynn Garrison-Mullins officiating. Burial will follow in Fairview Cemetery in Narrows with graveside rites conducted by VFW Post #6000 of Narrows, American Legion Posts #68 of Narrows, #311 of Pembroke and #145 of Peterstown. The family will receive friends at Riffe’s Funeral Service Wednesday from 6 to 8 PM. The family requests that those sending memorial contributions, please consider contributions for a family trust fund in Kelly’s memory, to Celco Federal Credit Union, or to the Virginia Wounded Warrior Program; 900 East Main Street, 6th Floor-West Wing; Richmond, VA 23219. The family is being served by Riffe’s Funeral Service in Narrows, (540) 726-2442, and online at riffefuneralservice.com.