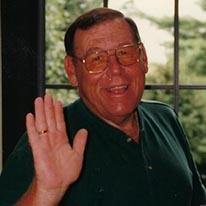 William “Bill” Earl Francis Patton, age 79 of Pulaski, died Wednesday, May 18, 2022 at his residence. He was born in Pulaski on September 30, 1942, and was the son of the late Macie Quesenberry Patton and the late Earl G. Patton. Bill was a retired deputy sheriff for Pulaski County, serving over 25 years, retiring as Captain. Bill was a former member of the Pulaski Jaycees.

He is survived by his loving wife: Dana Smith Patton of Pulaski: his son; Richard “Rick” Lee Patton, and his wife Gina of Pulaski: grandson; Kristopher Shelor-Bourne and his wife Jennifer of Pulaski: his God Daughter; Andriette Vaughn Farmer and her husband Thomas of Stanley, NC.: special friends; Terry and Suzanne Vaughn of Pulaski: several nieces, nephews and cousins.

Memorial service will be held Sunday, May 22, 2022 at 3:00 p.m. at Seagle Funeral Home with Chaplain Robbie Vance officiating. The family will receive friends from 2:00 p.m. until 3:00 p.m., prior to the service, at the funeral home. The family would like to extend a very special thank you, to Tony Smith (brother-in-law), Medi Home Health Hospice, and to special friends Terry and Suzanne Vaughn.

In lieu of flowers, expressions of sympathy may be made in the form of donations in Bill’s memory to American Cancer Society and to the Alzheimer’s Association.