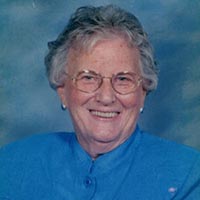 Daisy Catherine Burnett Patrick, age 91 of Dublin, died Thursday, December 25, 2014 in the Trinity Mission Health and Rehabilitation Center in Hillsville. She was born on August 1, 1923 in Max Creek, and was the daughter of the late Daisy Crowell Burnett and Ferd Norman Burnett. She was a member of the Dublin Christian Church, where she was proud to be the oldest member, and was a retired employee of A.T.& T..

In addition to her parents, she was preceded in death by her husband, Richmond Patrick, and a grandson, Jeff Patrick. She is survived by a daughter, Vickey Shoemaker and her husband Dennis of Concord, NC; a son, Jerry Patrick and his wife Bev of Pulaski; three grandchildren, Debbie Linkous and her husband Phillip of Christiansburg, David Shoemaker and his wife Christina of Fayetteville, AR, Emily Causey and her husband John of Harrisburg, NC.; five great-grandchildren, Brady Linkous, Kayla Linkous, Wyatt Shoemaker, Madeline Shoemaker, and Caroline Causey. She is also survived by several nieces and nephews including, Hetty Fowlkes of Max Meadows.

Funeral services will be held Sunday, December 28, 2014 at 3:00 p.m. at Dublin Christian Church with the Rev.Cliff McLawhorn and the Rev. Terry Hodge officiating. Interment will follow in Highland Memory Gardens. The family will receive friends on Sunday, December 28, 2014 at the church from 1:00 p.m. until 3:00 p.m. service time. In lieu of flowers, expressions of sympathy may be made in the form of donations to her church in her memory; Dublin Christian Church P.O. Box 1330 Dublin, VA 24301.