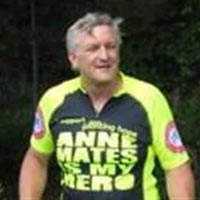 Frank W. Partsch III, 66 of Blacksburg, formerly of Northfield Vermont, passed away on Friday, June 5th. Frank’s life began with his adoption as a baby by a loving family, Frank and Marilyn Partsch in Weymouth, Massachusetts. At the same time, Frank also gained an older sister, Anne, who also was adopted. Brother Joe and sister Kathy followed in later years.

As a child, Frank’s favorite stuffed animal was a monkey named Jasper. If Anne wanted to watch a television show she would tell Frankie, as she always called him, there was a monkey on the show. Sweet and gullible, qualities that remained with him throughout his life, he would follow Anne’s suggestion. Many years later, Frank’s favorite pet came along-Brandy, a beautiful Saint Bernard. Frank liked to tell how Kathy and Joe jumped on the kitchen counters when Brandy first came home with dad. Other stories involved car rides in the family Corvair with Brandy laying across everyone’s lap in the backseat.

The Partsch family home was located on the beach. Frank enjoyed the water, swimming and kayaking and boating -except the annual spring chore when he had to get under the boat to scrape off old paint and apply anti fouling paint.

As a teenager, Frank worked in a greenhouse. This experience helped him when he became a homeowner. Frank spent plenty of time playing in the dirt. Frank’s bicycle riding began at this time with regular rides to visit his grandparents in Scituate, a fifty two mile round trip ride.

In high school, Frank tried out for the football team but was not chosen as he was too small. Instead he joined the wrestling team.

Frank went on to attend Suffolk University in Boston enrolled in Sociology, with a concentration in Crime and Delinquency. It was Frank’s wish to work with young people. Frank volunteered in juvenile justice programs but was not able to obtain a job in the field. Working with young people would come later as a religious education teacher.

Frank enjoyed theatre and became the lighting technician for the school’s theatre. Despite his fear of heights, he would hang from some precarious positions to hang lights. He went on to take an unpaid position in the same capacity with the Boston Children’s Theatre.

In 1975 Kathy, also a student at Suffolk met Frank. Ask her to describe the night of the “great car chase,” she will tell you that Frank really did chase her. Frank’s mom was relieved when they met as she was concerned that he would run away and join the theatre as a profession.

Frank and Kathy were married in 1977. The day of the wedding, Frank was so excited he broke a toe dancing in the bathroom. Luckly he had a groomsman with a background in orthopedics.

Frank’s family expanded to include Kathy’s mom and dad and three sisters. Frank became their big brother. Kathy’s dad, Dick, was delighted to have a man in the family and took his new son in law under his wing, buying him tools every occasion he got.

Like most newlyweds, with little furniture, Frank tried his hand at making a bookcase-out of particle board. Frank later admitted that although sturdy it was incredibly heavy and future projects would need to be made out of more suitable wood. Later, Frank built a shaker style tall clock which sits in their living room.

Next housing adventures began. The happy couple bought their starter home in Hyde Park, Massachusetts, a neighborhood located in Boston. Here he was fortunate to have a wonderful neighbor who showed him how to do renovations. Frank enjoyed working with his hands, a skill that helped him throughout his life and that he shared with others. Feeling confident with Kathy beside him who will tell you Frank could fix anything, the couple decided to build their dream house-a post and beam home in Stoughton, Massachusetts acting as general contractors. Side by side, they cleared the land, framed interior walls, laid floors and all that building entails.

Undeterred, in 1992, they moved on to a bigger project when they moved to Warren, Vermont to the Sugarbush Ski Area where they purchased a nine room bed and breakfast which required constant attention. Frank made many friends here including several Brits who got him interested in cricket. He enjoyed the camaraderie and the language with terms like “sticky wicket” and “googly.” Here he also took up cross country and downhill skiing. After twelve years, the inn was sold and once again they built a new home this time in Northfield, Vermont on a beautiful five acre wooded lot where they were back at it clearing trees. At least this time, they hired a contractor, Frank only had to frame and finish the second story. Always looking to please Kathy, one winter he built a pergola in the basement, followed by laying a large flagstone patio. Frank and Kathy enjoyed many hours in their beautiful yard surrounded by gardens, with visits by moose and bear.

While living in Northfield, Frank made new friends who were avid bicycle riders. He rode many dirt roads and mountain or gap roads. In 2014 Frank began participating in the Pan Mass Challenge, a two day 192 mile ride starting in Sturbridge, Massachusetts and ending in Provincetown at the tip of Cape Cod. The ride raises several million dollars each year for the Dana Farber Cancer Institute. Frank’s impetus for this ride was the inspiration and courage his sister Anne showed while fighting cancer. Anne was able to see several family milestones before her death as a result of treatment at the Institute. In addition, Frank became a monthly blood and platelet donor.

Frank joined a local woodcarvers group and began whittling. Frank’s favorite subject was Santa Claus. If you visit Kathy at Christmas you will see the delightful folk art Santas he created. Frank enjoyed making Santas for family and friends. Kathy was relieved that he did not lose any fingers!

Once settled in their new home, Frank and Kathy started attending Saint Monica’s Church where they joined the RCIA team (Rites of Christian Initiation for Adults); Frank joined the Men of Saint Joseph, the Knights of Columbus, following in his dad’s footsteps. Here, Frank began teaching religious education.

Frank was always looking to try something new. Some of his exploits included zip lining, surfing in Hawaii and windsurfing in Nantucket, Massachusetts. Always willing to entertain, when Frank tried out the latter, the instructor gave him a wet suit far too small for a person of his 6’2” stature. Kathy rolled around in the sand watching him trying to pull the tight suit over his body. Something similar happened when Frank started becoming a serious bicycle rider.

Frank and Kathy enjoyed several trips overseas including visits to Germany, Switzerland, Austria, England, Scotland and Wales, Ireland and France. They also traveled in the US with Frank doing a backcountry ski trip in Yosemite. The couple also enjoyed a windjammer cruise off the coast of Maine.

Frank had an interesting and varied career, working in a community bank, a major mortgage lender, with the Vermont Tax Department and finished his career with Lowe’s in the tool and hardware department-how appropriate!

In 2017 Frank and Kathy began their new life in Blacksburg, Virginia to escape the cold snowy Vermont winters and muddy springs. Frank immediately became immersed in the community continuing his membership in the Knights of Columbus, helping with building projects through the His Hands Ministry, Small Christian Community at Saint Mary’s Church and teaching religious education. Frank continued bicycle riding and joined the NRV Bicycling Club. Frank was surprised to find that the roads here were not as flat as he had anticipated but undeterred he rode on.

Frank was always smiling and willing to lend a hand. He touched so many lives. He will always be with us.

Please consider donating to the Dana Farber Cancer Institute. For more information about the ride and the institute go to pmc.org/ways-to-give. Thank you.

A private funeral mass will be held at St. Mary’s Catholic Church. A drive-in graveside memorial service will be held Friday, June 12, 2020 at 12:30 pm at Memorial Gardens of the New River Valley at 2551 North Main Street in Blacksburg. All who wish to attend may do so and will be able to hear the service from the safety and comfort of their car through their car radio. A drive-through visitation will immediately follow. Visitors will be able to speak to the family from their cars as they exit the service.