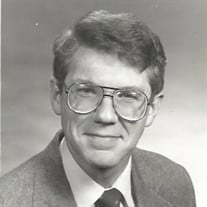 David Joe Parrish died peacefully at home Monday morning, July 19, 2021, in Blacksburg, VA, from the aggressive prostate cancer he fought bravely for 11 years. From the beginning of that fight, he was grateful for having lived a full life of family, friends, teaching, racquetball, fishing, gardening, and golf. He was 77.

David was born December 23, 1943, in Knoxville, TN, the son of Leon and Evelyn (Moore) Parrish, the middle child of three brothers (Thomas and Donald). He was raised in Johnson City, TN, where he also attended East Tennessee State University. At ETSU he was cadet commander of the Army ROTC. It was also at ETSU that he met his future wife of 52 years, Janette Gass, in the university choir. After graduating Magna Cum Laude from ETSU, he received a National Science Foundation grant for graduate work at Wake Forrest University. He then went on active duty with the Army, stationed in Germany for two years, where he rose to the rank of captain. Upon returning to the US, he completed his PhD in plant physiology at Cornell University.

After a year and a half of post-doctoral work at the University of Nebraska at Lincoln, he took a professorship at Virginia Tech in Blacksburg, in what was then the Department of Agronomy. David was instrumental in the evolution of that department into the Department of Crop and Soil Environmental Sciences and was one of the original authors and drivers of the Environmental Science BS degree program, and was also Undergraduate Program Director for many years . He was a respected academic advisor to both graduate and particularly undergraduate students. David was a great writer and believed in the importance of writing, which he shared with his students. In addition to the miles of red ink bestowed on his students’ papers, he coauthored the textbook Plant Science, and in his final years wrote The Gyroscope of Life, a personal reflection on important themes from his lifelong study of biology and life sciences.

David was an avid racquetball player, substituting racquetball for his lunch hour for all of his time at Virginia Tech. He also became a regular fisherman, getting out on The (New) River as soon as the weather would allow, racking up over 170 days on The River one year. In his later years he took up golf, meeting up with a cherished regular Tuesday group most weeks. He also maintained an abundant vegetable and fruit garden, despite marauding deer and other woodland creatures.

David is survived by his wife, Janette, and sons Joe (Angela) and Nathan (Honorine), and grandchildren Carter, Tyler, and Evelyn. He is also survived by his younger brother, Donald. He was preceded in death by his elder brother, Thomas. A memorial service will be scheduled for a later date.