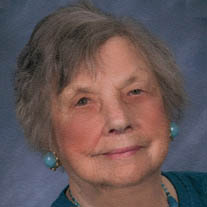 Frances Jones Parks, age 95 of Pulaski, died Tuesday, February 2, 2016 at Carilion New River Valley Medical Center. She was born on January 31, 1921 in Pulaski County, and was the daughter of the late Lula Dalton Jones and Kenley Roby Jones.

Frances was a longtime member of the Aldersgate United Methodist Church, where she was the treasurer during building of the church. She was an active member of the V.F.W. Post 1184 Auxiliary, an avid reader, a volunteer for LewisGale Hospital – Pulaski, for over 35 years, and could be seen playing Bingo wherever the doors were open, unless she was traveling.

Funeral services will be held Friday at 11:00 a.m. at the Aldersgate United Methodist Church with the Rev. Becky Wheeler officiating. Interment will follow in Thorn Spring Cemetery. The family will receive friends Thursday at Seagle Funeral Home from 6:00 p.m. until 8:00 p.m.

Flowers are appreciated, but for those who wish, they may make memorial contributions in her memory to the Aldersgate United Methodist Church parsonage fund 1946 Medallion Drive, Pulaski, VA 24301.