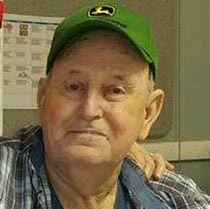 James Douglas “Doug” Pagan, age 83 of Pulaski, died Sunday, April 8, 2018 at Carilion Roanoke Memorial Hospital. Doug was a member of the Wesley Memorial United Methodist Church. Doug grew up surrounded by farming, and continued carrying on this tradition his entire life. Doug also worked full time and retired after many years of service to the Radford Army Ammunition Plant.

Funeral services will be held on Thursday, April 12, 2018 at 2:00 p.m. at Seagle Funeral Home with the Rev. Teresa Tolbert officiating. Interment will follow in the Pagan Family Cemetery. The family will receive friends at the funeral home on Thursday from Noon until 2:00 p.m.

In lieu of flowers, expressions of sympathy may be made in the form of donations to Wesley Memorial United Methodist Church % Rev. Teresa Tolbert 5897 Alum Spring Road Pulaski, VA 24301.