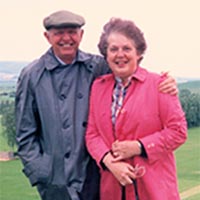 To the many who knew him, his memory will no doubt bring a smile to your face. He was a true “people person,” always stopping for a chat. He was, above all, an educator and encourager of young people.

He graduated from Virginia Polytechnic Institute in 1949. Although his graduate studies included work at other universities, Virginia Tech was always where his heart was. In 1957 he joined the VA Tech English department faculty, and over his 35 year career served as teacher, course advisor and Department Head Assistant. He was often recognized for teaching excellence by VA Tech, receiving the Sporn, Wine, and Alumni awards. The Commonwealth’s highest honor for faculty at Virginia’s public and private colleges and universities, the Outstanding Faculty Award, was presented to him in 1987 by Governor Baliles on behalf of the State Council of Higher Education. In 1970 Jim organized the first VA Tech English study abroad program, through which he took over 700 students to England and Scotland over the next twenty eight years. Jim changed the lives of many students by lending encouraging support or broadening their perspectives through world travel. A gifted public speaker, he was often invited to speak on a variety of subjects, and was known for enlivening his talks with poetry.

He was a stalwart Hokie fan and a competitive bridge player in a group formed 50 years ago by members of the VA Tech English and Math departments. He belonged to the Blacksburg Methodist Church and was involved in Rotary, Ruritan, and Torch clubs, as well as innumerable genealogical societies. Other affiliations included Historic Smithfield, ODK, and the VA Tech Old Guard. He always endorsed the VA Tech and Rotarian club mottoes, “that I may serve,” and “service above self.” In lieu of flowers, contributions may be made in his name to the service organization of your choice.