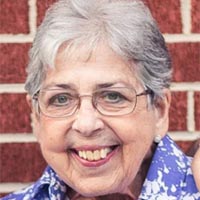 Flanders Graham Ousey, 78, passed away at her home in Blacksburg, surrounded by her family, on Saturday, August 10, 2019.

She was born in Montgomery County, VA in 1941 and graduated from Blacksburg High School in 1959. After school, Flan joined the U.S. Army where she met and married her lifetime love, Jay Baker Ousey, on February 10, 1961. Flan and Jay traveled the world together living in Cyprus, Guam, Japan, Spain, and Puerto Rico. Flan mourned the loss of Jay on June 10, 2019. Flan had an infectious love of flowers, birds, and butterflies and was an avid reader and writer of poetry. She nourished all in her world with love, faith, and generosity.

Preceding Flan in death were her parents, William (“Tom”) and Ruth Graham, and her sister Barbara Croy.

The family wishes to thank all of those who cared for her during her last months, including the compassionate professionals at Heartland Hospice. The family will hold a private memorial service for Flan. In lieu of flowers, please consider donating to your favorite charity.