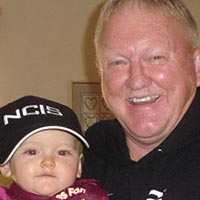 Thomas Richard (Rick) Ould, Jr., 59 of Glen Lyn, passed away Friday, December 12th, 2014. He was born in Pearisburg, Virginia on August 5th, 1955 and was the son of Violet Buck Ould and the late Thomas Richard Ould, Sr.

A 1973 graduate of Narrows High School, Rick was a retired employee of Appalachian Power in Glen Lyn where he worked as a supervisor. He served as mayor of Glen Lyn and served on town council for many years. In addition, he was a member of Intermont Lodge #269 A.F. & A.M. Rick loved writing songs, singing, playing guitar, photography, golf, and was an avid Virginia Tech and Green Bay Packers fan. He also loved his cats and his dog. He will be dearly missed by his family and many special friends.

In addition to his mother, he is survived by a daughter, Lauren Ould of Princeton; a granddaughter, Audrey Elizabeth Light; a nephew who was like a son, Thomas Rusty Osburn of Princeton; four sisters. Peggy Ould Robertson and husband George of Leland, North Carolina, Nancy Ould Whitfield and husband Steve of Burlington, North Carolina, Bonnie Ould Lowe and husband Jim of Newport News, Virginia, Cathy Ould of Princeton; a brother, Bill Ould of Roanoke; an aunt, Helen Webb of Oceana, West Virginia; several nieces, nephews, cousins, and many special friends.

A memorial visitation will be held Wednesday, December 17th, 2014 from 5 to 9 PM at Riffe’s Funeral Service in Narrows. A memorial service will be held Thursday, December 18th, 2014 at 1 PM in the Chapel of Riffe’s Funeral Service with Tony Reed, Minister, officiating. The family requests that in lieu of flowers, memorial contributions will be made to Giles Animal Rescue; P.O. Box 354; Pearisburg, Virginia 24134.